Yesterday I bought my very first actual Lego set! I’ve had the big tub of Lego pieces since I was a kid, but never an actual, honest to goodness set. I chose to get Big Ben from the architecture collection, and I have to say, it was a blast to put together! This is pretty much how it went:

Once upon a time I built Big Ben. That’s right, it was me all along. When it was completed, it was a majestic site to behold.

But then, seemingly from nowhere, a Dalek appeared!

It started exterminating every tiny thing it could find! And if that wasn’t bad enough, a second Dalek came along to party as well!

While they were exterminating, The Silence paid us all a brief visit.

Wait, was I saying something? That’s so weird, I feel like I’m forgetting something important and there are suddenly all of these marks all over my hands, but anyway back to the menace at hand: DALEKS!

They exterminated bugs and other little Lego people. Then they tried to exterminate me, but they failed! Mostly because they are tiny and I’m gigantic in comparison. Oh right! Marks! On my hand! That’s what they meant! The Silence was there! 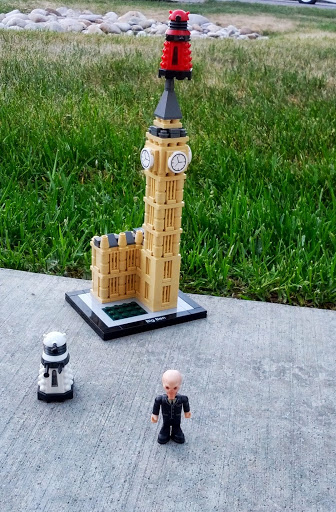 Ugh, this is me getting very old. You see, I seem to have forgotten my place again. What was I talking about? Daleks? Big Ben? That’s right. Big Ben had been created and then there was a Dalek attack! See?! Daleks!

And that’s pretty much how things ended. The Daleks conquered everyone but me. (Because I’m huge!) The Doctor never showed up because I didn’t pull him out of any of my mini figure packs. It was a good day for Daleks, and a bad day for bugs.

And that is the end of my story about what happened when I put together my first set of Legos.

(Also, that’s another one off of my bucket list!)