My baby goblin is just about to turn 4! I can barely believe it. As per usual, my friend Andrea came in on an airplane to help with the party. When I asked the kiddo what he wanted, he said, “I want a superhero party!” When I asked which one and he just started listing: Spiderman (definitely his favorite), Thor, Captain America, The Flash, Batman, Ironman, Superman… But not The Hulk. For some reason, he really doesn’t like the big green dude.

Since we had such a big group of heroes we were dealing with, we decided to forgo a single cake and instead make cupcakes. I think they turned out pretty 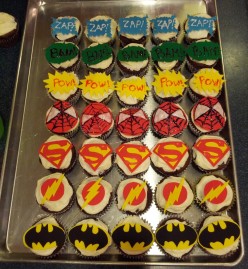 well. There isn’t anything special about the cake and frosting, they were just store-bought. However, we knew we needed to do something other than standard frosting for the toppers. We went to a craft store and found Wilton Sugar Sheets and decided we could figure out a way to turn them into decorations. For the Batman, Flash, and Superman designs we printed templates. Spiderman was a freehand effort by me, and the speech bubbles were a freehand effort by the rest of the cupcake making crew (AKA Andrea and Josh). Pretty much these took forever to make, but I’m definitely glad we did them. They were totally worth all of the time and effort.

The rest of the party was simple. We went to our wonderful friends’ house and let the kiddos play in their backyard in their inflatable pool and sprinklers. We had a great BBQ and because all of my friends are so amazing, we had plenty of food and drink to go around without me having to put much into it (meaning they all offered to bring things, and I took them up on their offers!). 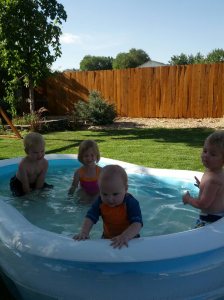 The decorations I kept simple. I picked up some superhero fabric at the store and quickly hemmed the edges, then I used them on the food table. I found a cool post on Pinterest where someone made a banner out of pages from a comic book, and bias tape. It took probably an hour from start to finish to put it together, and I absolutely adore the final product. After the party, it moved to my kids’ room as a permanent fixture on their wall. 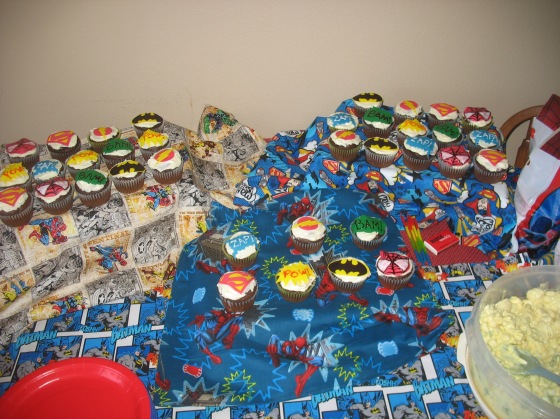 I love parties, especially birthday parties. I love that they create a time for friends and family to get together and celebrate. The little man had a great time, and I deemed it a rousing success!

The awesome cape kiddo is wearing was made for his uncle and daddy by his great grandma Betty. How cool is it?! Seriously, I am super impressed. It is reversible and the other side is Superman…

One thought on “superhero party for may favorite little boy goblin…”