P is for panic…

Note: This is a serious post about me. I don’t often do serious posts about me, so I’m going to post pictures of me ruining family photos by mugging for the camera and demanding ALL THE ATTENTION first. And then, after the serious post is done, I promise to end the post proving that I never change… it’s a fact. 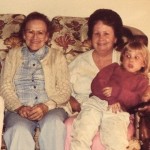 Waking up completely unsure of what direction to go. That has been my life for an extremely long time. I started to have pretty severe panic attacks when I was in fifth grade. I quit sleeping, tried my hardest to tune out the news, and spent a good chunk of my time at church zoned out. The smallest things set me off, and it was just too much to deal with.

When I told people about my little problem, they would react one of two ways, they either got this really confused and sad look on their face and said something like, “Oh, honey, you just need to relax!” Or they would become a bit upset with me and say something like, “Pray about it! It will go away!”

Over the next several years two things became very clear to me: relaxing had nothing to do with anything, and praying didn’t seem to be making it go away.

Eventually, I just quit talking about it. People didn’t need to know that my head was a war zone of what iffs and fear. I learned to cope. Music generally helped me find my center, and watching TV through the night tended to keep me pretty even. So I found a TV in the garage and hid it in my closet along with an antenna for late night talk show viewing. I started collecting lullaby CDs and kept them in my CD player so that I could loop them over and over. It wasn’t perfect, but it helped.

Somewhere in there I discovered writing. I would stay up for days writing poems and stories. I penned out pages and pages of nonsense that never saw the light of day, but it helped. It allowed me to express the pain and to get it out without listening to other people tell me I just needed to fix myself somehow.

I read every book in my house. I read fiction, I read my mom’s old medical books, I read the dictionary. I read all of it until I ran out of things to read, and then I started over. I found that I could tear through a book or two in a day.

It seemed that my lack of sleep didn’t really change my life. I still had energy for church activities and school work. I still felt up to hitting the slopes and taking off on a snowmobile. I got used to my world of night, and it didn’t seem like a big deal anymore.

Of course, all of this could have been much easier for me. If I had been more adamant about finding a solution to my problem to, well, anyone I could have had a better childhood. There is help out there in the form of medication and counseling, but I had no idea. People I trusted had told me that I needed to take care of it myself, so I did my best, and I honestly found a pretty full life. However, if I could do it over, I would insist on seeing someone, and I would insist there was nothing in my power that I could do to get rid of the panic myself.

Now, I’ve fallen into a routine. When the panic starts, I generally know how to tamp it down. The attacks are rarely debilitating anymore, and technology is incredibly helpful. Music is only as far away as my phone. Distraction is only as far away as Netflix. The key is learning to recognize triggers, to avoid them when possible, and to work through them when they are encountered.

Okay, now, I know you are all waiting to see more pictures of me making faces at cameras, so here you go!