I have a daughter named Jenna and this month she turned 5! For a good chunk of her

life, I’ve been concerned that she and I may not have much to connect on as she got older. The girl is all pink, frills, and lace, and I, well, I am not. However, several months ago while I was watching Star Wars and cleaning, Jenna joined me. She sat down, watched the entire first movie with me, and then asked for more. We watched all three in a row without her getting antsy, and at the end she told me Star Wars was her new favorite movie. That was probably six months ago, and at the time she asked me if she could have a Darth Vader cake for her birthday, I said yes and figured she would change her mind. She didn’t! Nope, not at all. My little girl decided she wanted a Star Wars party with a Darth Vader cake and princess candles. She knows what she likes, and I love that she and I have something that we can enjoy together!

My friend Andrea and I always make my kids’ cakes, and we were trying to figure out how to manage a Darth Vader cake and Star Wars themed treats. We decided on lightsaber cake pops, and a sheet cake with Vader’s head drawn on it with a powdered sugar outline and piping gel filling it in. The cake pops were strawberry cake covered in semi-sweet chocolate and red sprinkles. The cake was chocolate on chocolate.

For a game, we played pin the tail on the At-At. Only instead of a normal At-At, we used At-Ore from Wookiee the Chew by James Hance. 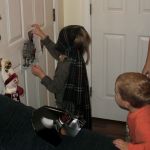 We also had a Darth Vader pinata that we let the kids hit with inflatable (as not to damage their little kid noggins) lightsabers. Then, we had Jenna pull the ribbon at the bottom to let all the candy out.

After the pinata fun was had, the empty shell made a pretty great mask. The kids tried it on and played with their Chinese yo-yo lightsabers and their inflatable lightsabers. After the kids were done having their fun, some of the adults decided to get in on the action as well.

This was the first year that Jenna didn’t mind being the center of attention while people sang to her and she blew out her candles. In fact, I would say she ate up everyone paying attention just to her. Part of me thinks that it was because she was having so much fun with a party she had been planning for so long that involved one of her favorite things. I asked her what part of the cake she wanted, and she said, “Darth Vader’s FACE!” She settled for part of her name though so that she could have the first piece.

After cake Jenna opened presents. She received quite the haul of Star Wars themed gifts, some pretty sweet Legos (that she began putting together and playing with pretty much as soon as guests began to leave), and several other neat things that she’s been hiding from her brother and playing with ever since she opened them. I think overall the party was a success and that everyone had a good time. I know for sure that Jenna was thrilled with how her Star Wars party turned out!

After everyone was gone, the kids and I posed in our Star Wars shirts. Andrea found the kids’ shirts at Old Navy, and then she added a pink band around the neck, wrists, and bottom of Jenna’s shirt to fit my little girl’s personality just a bit better.

This is Jenna today dressed up as Vader and wearing a shirt that our friend Kevin made for her featuring her second favorite thing in Star Wars: a stormtrooper. She was running around the house playing, and when I saw her, I made her run out the front door so I could snap a quick picture of her.

Finally, This is a picture of me as Darth Vader… because, although I wore my hair in Leia braids at my daughter’s request, I’m really more in tune with the Dark Side of the force.